In 1891, Domenico Comparetti described the Kalevala in terms of “the shamanism of the ancient Finns”, a description that resonates with popular imagination today, yet it turns out to be problematic in several ways.

Dr. Daniel Haataja has been in Norway for the past few years researching the Kven people, who migrated from Finland to Norway and have their own culture and language. In this presentation, he will be discussing at length the current situation with the Kvens and the Kven language in Norway. The
program will include time for audience questions at the end.

Dr. Haataja has a PhD in linguistics and directs the Finnish program at the University of Minnesota Twin Cities.
Members, please join at 6:45 for organizational announcements and potential future members, join at 7:00 for the presentation itself.

Welcome to FINN FUN DAY 2022. Kickstart your fall before activities, events, and Finnish language classes start by joining us for a day of food, fun, and games! Mölkky tournament! All are welcome whether you are Finnish, Finnish American or just love all things Finnish! Tervetuloa! 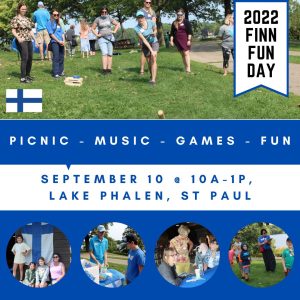